Earlier this year my general practitioner measured my height at my regular check-up.  What-the-heck?   I’m used to my kids standing under the ruler annually, but I haven’t done that in…well, never mind.  It doesn’t matter how long it has been since I stopped growing.  I, of course, asked why I was being measured and was told by the very young, very caring nurse that it was because I was getting old and needed to be monitored to see if I was shrinking!  Great. That is something I hadn’t thought about. Clearly, however, it is necessary to monitor for things that we know intuitively, but maybe don’t think about day-to-day.

We monitor certain health parameters. We monitor the chemicals in our pools. We monitor all kinds of things in the lab.  But what about the stuff we don’t know to monitor? What about the things we haven’t been able to see before?  When Sean, Dale, Phil, Derrell, and Anthony launched vacuum ultraviolet (VUV) spectroscopy as a universal detector in GC applications customers started to see things that had never been seen before outside of synchrotron facilities. In fact, the VGA-100 has shown us a number of VUV spectra that have never been seen before. 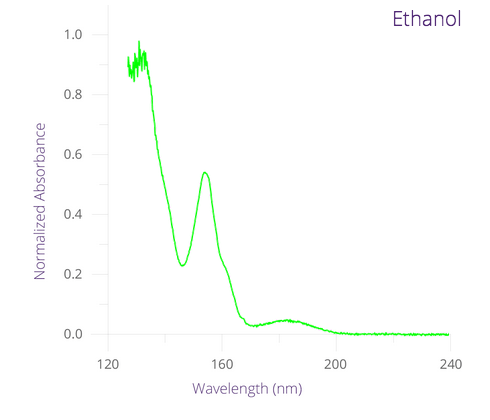 Seeing Things in a New Light

Using this newly found spectroscopic vision we have been searching for what sales and marketing types like to call “The Killer App.” Arguably we have quickly been able to identify several of these in the petroleum, petrochemical and specialty gas markets.  We have customers bring us new things to try all the time to look at some really interesting analytical challenges.  However, we have been very surprised by the fact that while we don’t always find the killer app, we often see things that customers hadn’t been looking for and didn’t know were there.

For example, on a recent on-site evaluation we injected a customer sample that had been running on their system for many years using mass spectrometry (MS) detection.  When we made the same injection on our system we saw a huge response for Ammonia. You cannot see ammonia on a MS or flame ionization detector (FID) and the peak went on for a number of minutes. The conclusion was that something in the matrix was sticking in the inlet liner and reacting with the temperature to evolve ammonia.  No one had any idea that this was happening.

Regularly, we set-up to do an evaluation and after connecting and purging the system we begin to see oxygen in our flow-cell, a clear indication of a plumbing leak or oxygen diffusion. After one such installation, the customer realized that all of their gas lines in the lab were highly susceptible to oxygen diffusion.  (Note, you should probably try to avoid polyurethane gas lines if you want to minimize your oxygen background.)

Also, because of our ability to do “pseudo-absolute” quantitation (the subject of a recent poster by Ling Bai from UT Arlington at ISCC and GCxGC 2015 and future application note) we are able to estimate, based on the response of known compounds, how much sample is being lost during injection, or in the liner, or from poor split conditions.

Lastly, despite what claims manufacturers make about the safe operating temperatures of their columns, we are also able to clearly identify column bleed.  In fact, we can measure it.  In theory this could be tracked to report the percentage of stationary phase that has degraded from your GC column.

How cool is that?

A New Tool in the Toolkit

We don’t always solve the challenge that our customers ask us to solve, but often we see things that they have never seen before. This new vision causes them to ask questions and think about things in a new way.  Most scientists would agree that having a new tool like this is an opportunity to go an entirely new direction.

How many times have we been sitting in the lab, staring at lousy chromatography, wondering why it wasn’t working? If you have a VUV detector on your GC, it is possible that you might be able to quickly figure it out.

Oh, and in case you were wondering, my height is holding steady!