Alternate Carrier Gases: The Solution to a Tightened Budget

Let’s face it: the economic impacts of COVID-19 have slammed the already tight budgets of labs across the globe.  Cutbacks have probably been implemented at your company to keep business afloat, yet the workload on your plate is likely the same or even bigger than before.  Now more than ever, everyone needs to be saving money.

Before the threat of the virus reached us here in the United States, I did some work with alternate carrier gases to analyze fuels using translated conditions of ASTM D8071-19.  Thanks to some GC theory and the versatility of the VGA detector, we were able to generate data comparable to helium using nitrogen and hydrogen.  Obviously, the major draw here is to save money, but recent events got me thinking: how much could we save by switching to hydrogen or nitrogen?  So, I decided to bust out the ol’ calculator.  Here’s what I found.

Let’s say your lab is analyzing gasoline using GC systems that need 10 cylinders of helium per month.  With detectors like mass spectrometers, you are more or less chained to helium since they don’t play nice with other carrier gases.  However, with the VGA-100 and VGA-101, you can analyze your samples with nitrogen or hydrogen, opening the door for some serious money saving.  A cost comparison can be found in Figure 1. 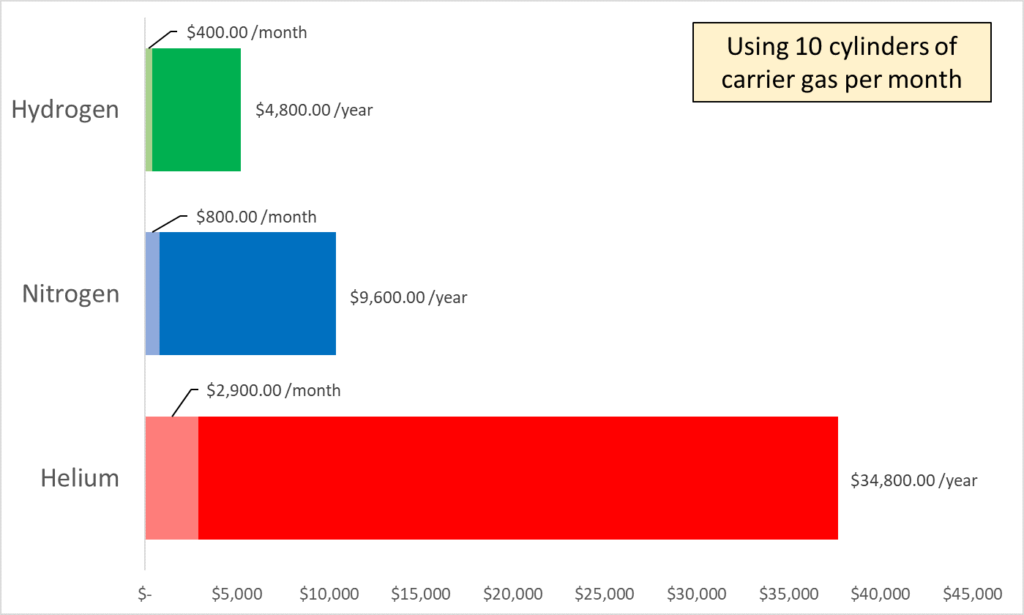 We can achieve these savings thanks to the immense versatility of the VGA detectors.  Like helium, hydrogen doesn’t absorb in the VUV range, so it won’t interfere with any VUV spectral measurements.  Additionally, nitrogen absorbs very little, and what little it does absorb can be ignored because the detector subtracts the spectral background from a background scan taken at the beginning of the run.

This is only one of the many benefits of adopting GC-VUV in your lab.  If you think you’re interested in savings like these, give us a call – we may not be working in the office yet, but we’re ready to help you out however we can!