I think everyone can agree that keeping your GC-setup the same is convenient. Some of us *cough*Jack*cough* like to be a little lazy and use the same GC column when moving onto other projects. Sometimes that works well, like my colleague Lindsey using a 30m x 0.25mm x 1.40µm 624Sil MS column for a variety of static headspace GC-VUV experiments, including methanol and ethanol in transformer oil, and residual solvents in pharmaceutical products. As a shameless plug, here is Lindsey’s blog on Chromatographic Compression & Enhanced Productivity For Residual Solvents Analysis. Conveniently enough, this column did quite a nice job for these projects!

Recently I spent some time with our VGA-100 (a Vacuum Ultraviolet spectrometer) and Gerstel MPS2 autosampler with Solid-Phase Microextraction (SPME) capability. My experiment centered around performing smokeless powder (e.g., the propellant used for firearms) analysis using headspace SPME. I decided to take Jack’s motto and be a little lazy for efficiency’s sake and used the already-installed 624Sil MS GC column. I figured since mainly volatile compounds are sampled using SPME, the 1.4 µm stationary phase shouldn’t be an issue with their elution times.  As foreshadowing goes, I quickly ran into problems.  Let’s examine the data.

Figure 1 shows the dataset I had to review, triplicate SPME GC-VUV analyses of smokeless powder (from 21 to 45 minutes). I stacked these chromatograms and immediately saw red flags. You can see in Figure 1 how the red, purple and yellow circles highlight peaks that didn’t appear in any of the secondary and tertiary replicates.

Figure 1. Three replicate SPME GC-VUV chromatograms of smokeless powder chromatograms stacked on one another (the first analysis is on the bottom). The colored circles highlight discrepancies between the chromatogram runs.

Any guesses on what the issue could be?

To confirm my suspicion spectroscopically, I examined the highlighted peaks. Figure 2 shows that these three poorly-shaped and broad peaks with different retention times were identical in their absorbance spectra!  Contrast those to the well-shaped peaks with consistent retention times.  You may be wondering about the identification of the carryover peak.  While a good absorbance library hit was not obtained, the peak is likely a mono-aromatic compound.  The clue is absorbance maxima between 165 to 210 nm as seen for 2-nitrodiphenylamine and the unknown.  I can speculate that it might be a dinitrodiphenylamine, which can be a component of smokeless powder and would be much less volatile. 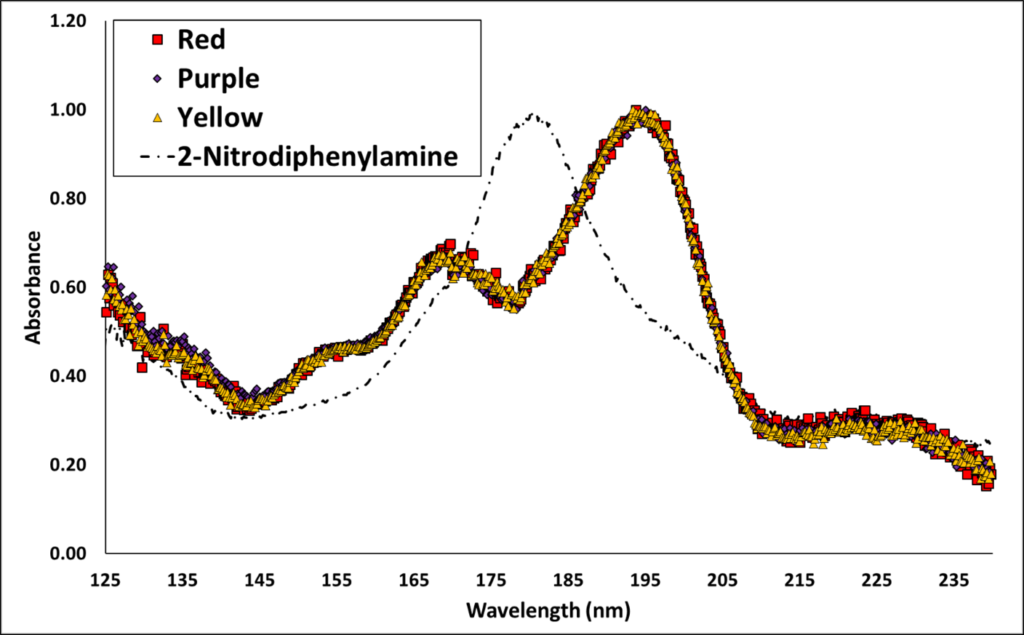 Figure 2. Three identical spectra were obtained from the 3 carryover peaks highlighted in Figure 1. Currently, the identity of the carryover compound is unknown, but it is likely a mono-aromatic compound given the substantial absorbance from 175 to 205 nm. One possibility is a dinitrodiphenylamine. For comparison, the spectrum of 2-Nitrodiphenylamine is shown.

These stubborn analytes from my SPME analysis of smokeless powder wouldn’t elute under my current GC conditions. Mind you, I had a total run time of 45 minutes with the maximum temperature at 270°C – I thought this would be hot enough and allow for plenty of time to elute all the compounds. But in the end, the data suggested compounds were being retained so long on the column’s thick film that they appeared as broad peaks in subsequent chromatograms.

Sometimes being a little lazy for convenience can cause a chromatographic headache! Thankfully, the VGA-100 allowed me to easily detect carryover and confirmed it spectroscopically. Now, all I need to do is choose a more appropriate GC column, get some reference materials to identify the unknown, and fire away again on my smokeless powder analysis! 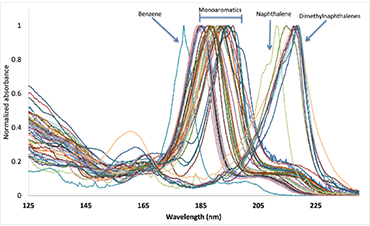 As a gas chromatographer using MS the coeluting-isomer problem didn’t bother me too much, as… 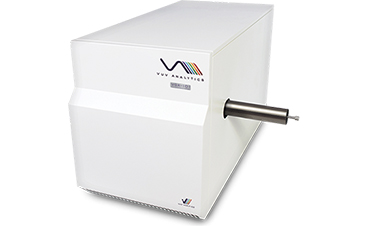 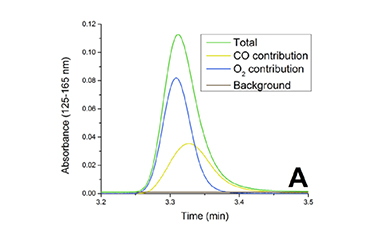